A STORY OF INNOVATION AND COMPETITIVE ADVANTAGE 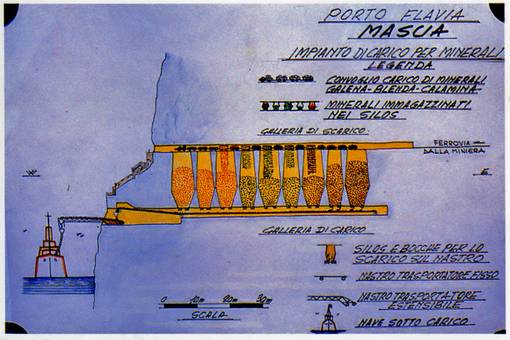 A story of innovation and competitive advantage – Today artificial intelligence really exists and is not something intangible, anymore. Nowadays, thanks to the computing power and years of studies on the AI, we have managed to make this technology ready to be adopted.

However, I asked myself: In the past, which were the steps of innovation similar to those we are experiencing today with chatbots and artificial intelligence?

There have been several innovative tools starting from the wheel, but my mind goes back to a journey done a few years ago …

During a vacation a few years ago I found myself visiting Porto Flavia: a mining port built in 1925 in the town of Masua, in Sardinia.

At the time, foundries across Europe had an insatiable need for minerals to continue their production.

So, the Belgian company Vieille Montagne, which at that time owned the mine, decided to reduce the costs of material transportation and commissioned the engineer Cesare Vecelli to figure out how to do it.

Before the port construction, all the companies that operated in Sardinia in the extraction of minerals, did not optimize the extraction and boarding process. The material was transported by wagons to the beach and then embarked on the shoulders of the galanzieri on small sailing ships.

From here the mineral reached Carloforte island where it was loaded on large ships that supplied foundries throughout Europe.

The galanzieri were forced to carry out repetitive and unskilled work which was soon replaced by a conveyor belt, an electric train and silos capable of holding 10,000 tons of material.

Porto Flavia marked a revolution in this process resulting a big time and cost saving.

In fact, the system allowed ships to be loaded directly through a conveyor belt that came out of the mountain when the ships arrived, thus eliminating the use of wagons, galanzieri and small sailing boats.

With the traditional method it took months to fill a 15,000-ton cargo, while after the construction of Porto Flavia the same cargo was loaded in 60 hours.

Obviously, this system has determined a great competitive advantage for the Belgian company that owns Porto Flavia, beating all the competitors who still used obsolete loading systems.

Today, companies that do not use artificial intelligence or automation systems in their companies will soon find themselves in the position of competitors of the Belgian company Vieille Montagne.

Current customers of a company, a bit like foundries at the time of Porto Flavia, want to establish an immediate communication channel with companies and want to do it as they are used to do with their favorite messaging channels such as Whatsapp or Messenger.

They want to communicate quickly and at any time.

Hence the competitive advantage of chatbots which allows companies to respond to immediate customer needs.

THE COMPETITIVE ADVANTAGE THAT CHATBOTS CREATED WITH CRAFTER.AI GIVE TO COMPANIES

Our goal is to allow everyone to use the advantages of artificial intelligence within companies.

We have found out that people outside the technical area do not fully understand artificial intelligence, chatbots and automation.

At the same time, the technicians are not able to fully understand what are the needs and timing to do business.

We thought about how great it would be if there was software capable of making professional automations that could be used directly by business people working in operations or marketing.

So we created crafter.ai and for this we feel a bit like the Flavia port of the contemporary era.